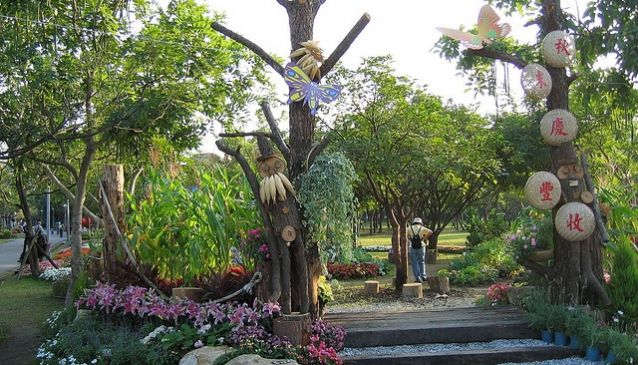 In the middle of this manic South-east Asian metropolis Taipei City lies an oasis. Daan Park is all about offering a sanctuary to the city-dwellers. Tall trees, sturdy bamboos, bushes, beautiful flowers and plants welcome you as you step into the park that covers more than 250 square meters. Since it opened to the public in 1994, Daan Forest Park has been Taipei's largest park. In Daan district, the park is bordered by Xinyi Road on the North,  Heping Road on the South,  Jianguo Road on the East and Xinsheng Road on the West.

Inside the park, the man-made pond surrounded by lush foliages has even some poised egrets lingering beside it and a few graceful, white geese gliding over the surface. At the centre of the park, a covered amphitheater is situated before rows of rising seating areas. Here, outdoor concerts and performances are held. In fact, a gaggle of picnickers swarm over and out of the seating areas each year, to swoon over Taipei's Summer Jazz concert (free of charge) in the sweltering Summer air.

Given that Taipei City is so safe, it is an incredible luxury to enjoy Daan Park's sprawling verdancy by day or night. During weekends, there are also kids tousling through sandpits and over swings in the children's playground areas, students studying with blankets laid on the lawns, and couples caressing under the pavilions that joggers weave in and around.

Daan Park provides further conveniences to visitors: some have rest facilities, public phones and drinking fountains. An underground parking lot is found beneath the park and Daan Park MRT station is right around the corner.