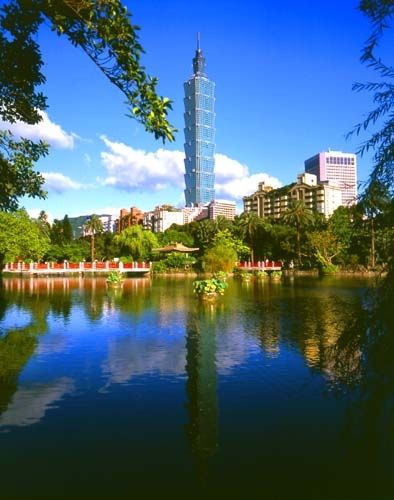 Sights and Highlights Recommended Things To Do

As the highest building in Taipei's skyline, the Taipei 101 is the city's most famous landmark. Aptly named, the building constitutes one hundred and one floors above ground, as well as five beneath. Nestled into Taipei's glitzy Xinyi district, the Taipei 101 is surrounded by such other prestigious landmarks such as the Taipei City Hall, World Trade Center, W Hotel and Grand Hyatt Hotel.

In the basement is a gourmet food court and grocer - offering the finest of local and imported produce. Above, from floors 1-5, Taipei 101's mall houses marble-topped galleries, showcasing luxury items from internationally acclaimed brands. The rest of The Taipei 101 consists of world class business centers and office spaces on the higher floors. Loved for its prestigious, central location, the Taipei 101 offers headquarters to many international corporations operating in Taiwan. A Guiness Record-Breaking elevator takes visitors to the indoor observatories on floor 85 - 89 and an outdoor observatory on the 91st floor. Here visitors can catch a view from the top of the Taipei 101. Meanwhile, on the 101st floor a select VIP club resides - offering access to only a selected few.

Taipei 101's storeys are numbered so to remember the turn of the century, at which they were constructed. And as one hundred is considered a number of perfection in Asian culture, surpassing one hundred in the number of storeys is supposed to represent progress for the city of Taipei. At the time that construction was completed, Taiwan's skyscraper was the first building to surpass 500m in height. This majestic building's angular silhouette is reminiscent of the asian pagoda - posing as a link from past to a potential future full of possibilities.

Besides being a core element of Taipei's urban aesthetic and visual identity, Taipei 101 is also the main attraction of the city's New Year's Eve activities. Taipei tries to be increasingly accommodating to Western tourism and investment, as is evident by the abundant English signage that's newly sprouted in city crooks and crevices. Every December 31st, Taipei residents flock to rooftops and sidewalks to catch a glimpse of the Taipei 101. Celebrating another dawn of a new western calendar year, the Taipei city government spares no cost in setting the Taipei 101 flare. A majestic blaze of fireworks arcs, swirls and cascades from the iconic building, mesmerising residents throughout the city.