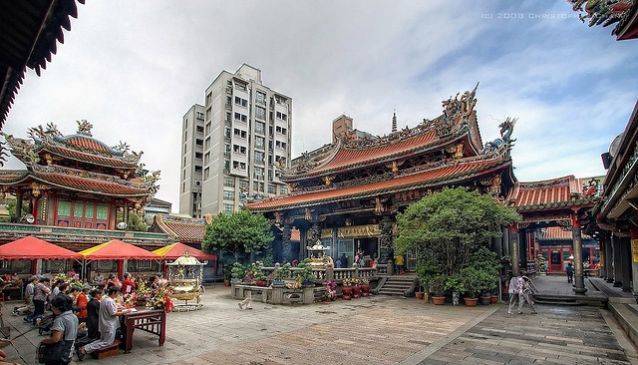 If you ask people where to go in Taiwan, 'temples' usually fall within the top five recommendations. When it comes to Taipei City's must-see temples, there is a very good chance that Longshan Temple sits comfortably at the top of the list.

Longshan Temple itself was founded in 1738 as a sacred place to worship the Buddhist Goddess of Mercy or Kuan-in. The present temple is a renovation of the original structure, which has needed to  be repaired or restored over time, as a result of both natural disasters and wear and tear. Thorough restoration undertakings began in 1919 and lasted as long as 1924. Stone carvings decorate the entrance hall - demonstrating the incredible craftsmanship of a bygone era. At the central door stands a majestic pair of dragon columns cast in bronze, the only bronze columns in Taiwan. During the Second World War, Longshan Temple was bombed but the onsote Kuan-In statue remained standing tall. In 1985 the government designated the temple a historical site.

Longshan Temple itself is a magnificent structure, but even better is the little ecosystem that's developed around it. This microculture sends tourists down into the grime of Taiwan's true culture. Crowds heave among vendors selling steamed pregnant prawns, second hand mobile phones and kitsch underwear of a truly individual kind. And, miraculously, inland and at the centre of this city the market that is located beside Longshan Temple is lined with some extremely cheap prime sashimi cuts. Herb alley is also situated nearby Longshan Temple. A gastronomist's delight, Herb Alley consist of a number of stores and vendors nestled beside each other in an overgrown green alley, selling huge numbers of fresh herbs at extremely affordable prices to meet the demand of the Chinese medicine shops nearby.